Paul Gordon is a Professional Magician, Entertainer, Magic Lecturer, and Author. He has published over forty books, including the best-selling Gold Dust Trilogy, Quidnunc and Article 52. His DVD releases include Live in Action, Card Startlers, Blockbusters With Cards, Gold Dust Live, and Quidnunc Plus. He's bringing that wealth of knowledge for a lecture right here At The Table. Grab a front row seat and join us for one of the UK's most prolific creator's in magic, Paul Gordon! Here's what you'll learn:

Lightweight: A spectator takes a random packet of cards. Simply by gaging the weight of the spectator's packet, Paul is able to create a matching packet with exactly the same number of cards.

Stripped for Poker: A heads up poker game where the spectator shuffles the cards and makes all the choices regarding which cards are dealt to their hand or to the dealer. No matter what the spectator gets, the magician's hand will always win!

Stripped for Oil and Water: A method for the classic Oil and Water effect where the spectator is freely allowed to mix red and black cards FACE UP.

Tally-Ho: Paul Gordon's take on the classic Henry Christ effect, Tally-Ho. The spectator selects words on the Tally-Ho Box and uses the deck to spell them out. Not only are you left with the four 9's, but you are also left with a royal flush!

Return of the Merely Thought of Card Miracle: Paul places a card in his pocket and has a spectator look at a freely selected card. The spectator also remembers its position in the packet. Paul then splits the cards a few times and asks the spectator if they see it. Regardless of whether or not they see it, the selected card is now in Paul's pocket. On top of that, the spectator could now count down to where their card is supposed to be, and Paul instantly knows the name of that card.

6 Card Brainwave: Spectator names any card in a small packet. Paul then shows that all the cards remaining are blue-backed cards, but the selected card is the only card with a red back.

Gem in Eye: A great four ace reveal that can be done with spectator's cards.

You'll enjoy entertaining your audiences with these wonderful and baffling effects from no other than Paul Gordon! 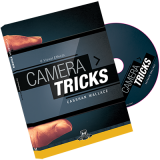