Crystal Card is a revolutionary idea based on a new principle. It can be used to perform a wide variety of surprisingly visual effects including:

- Crystal Card: Two cards thought of by two spectators are magically revealed on a piece of green crystal right before the very eyes of the audience!

- Past and Future: A card selected by a spectator materialises on the performers crystal. The performer claims that he saw the selected card through his crystal before the card was actually selected and proves it!

- Bizarre Revelation: The performer rests his palm over a green crystal - a card, thought of by a member of the audience, magically appears on the crystal

- X-Ray Screen: A card is selected and returned to the deck which is then wrapped in a silk. A spectator looks at the wrapped deck through a crystal and sees the selected card!

- Supreme Exposure: A prediction mysteriously materialises on a sealed piece of crystal. A card previously selected by a member of the audience is turned face up. Its a match!

- Crosswise Illusion: A card selected by a member of the audience magically appears on a special crystal inserted crosswise in a deck of cards!

- Palm Reader: A card is selected and rubbed on a spectators palm. The spectator brings her palm over a green crystal and the selected card mysteriously appears on the crystal! 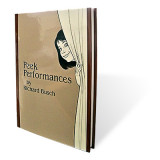