The Maestro left us the 6 of April, 1997, but his magic remains alive. The magic of Ascanio, in four volumes. His theories, his thinking, his philosophy, and the entirety of his card magic, including his legendary routines (with over thirty previously unreleased tricks), full of the Ascanian touch, and his magic with pocket knives.

Vol. 1 "The Structural Conception of Magic"

Vol. 2 "Studies of Card Magic"
This second volume, with forewords by Roberto Giobbi and Aurelio Paviato, contains an exhaustive study of the Ascanio Spread and its variants, and all the lay-downs. These sleights, the cornerstones of Ascanio's magic, have never been explained so thoroughly before. Careful study of this section alone will give you a complete understanding of these marvelous sleights.

Get ready for the pleasant journey of studying the early versions of Ascanio's classics. Oil and Water using the Ascanio Spread (a three-phase routine) and Father Ace and Sons (versions 66 and 67) will take you into the wonderful world of Ascanio's routining. See the theory in action, with examples of concepts explained in the first volume, such as the Parenthesis of Forgetfulness, the Anti-Contrasting Parenthesis, Stressing the Initial Situation, Slow Execution, misdirection, and the In-Transit Actions.

The next three chapters include magic by Ascanio's mentors, Kaps and Carles, by his colleagues Dany Ray and Fu Manchu, and by one of his idols in magic: Ed Marlo, all with the Ascanio treatment. This section contains tricks shown to Ascanio by these great masters.

Chapter Seven includes Ascanio's favorite routines: If You Don't Pay Attention..., Aunt Enriqueta's Aces, The Trick I Would Show Dai Vernon, Sleightless Oil and Water (or so it seems), and Aces with Love.

In Chapter Eight two other Ascanio favorites are described: The Wriggling Aces and Don't Blink! Revisited. The Trick I Would Show Dai Vernon is a lesson on Conditioned Naturalness, and The Wriggling Aces was part of his winning act at FISM in Amsterdam 1970.

Chapter Ten finally brings you some of Ascanio's minor masterpieces such as: Dolores's Trick, The Pathology of Cards, X - 1 = 0, Triumph, Eight-Card Oil and Water, The Nine Facts, Antagonistic Aces, and A Hunger for Dreaming.

The Third Volume
Includes some of his signature pieces like The Restless Lady, Alternating the Colors, and his legendary All-Backs routine. These routines were part of the act that Ascanio performed at the Amsterdam FISM Convention, where he won First Prize in Card Magic. Also included are his classics Sequacious Spades, and Cards Through the Table, The Ten Cards Up the Sleeve, The Aces of My Exam, Freddy Fah's Wallet, Mentalism by Elimination, The Magical Nine, Stranger Ambitious Card, and The Nudist Deck. The book ends with Black Days, a masterpiece of magical thinking, as Arturo himself described it.

Fourth Volume
Knives and Color-Blindness is not just a repertoire of sleights and routines. Above all, it encapsulates an extraordinary philosophy of magic, in which the love for detail, for naturalness and psychology alike, are given as much importance as technical skill. Ascanio's remarkable in-depth study of the psychological aspects of the "Paddle Move" and the "color change" with knives is a fundamental contribution to the magic of the color-changing knives. Arturo de Ascanio shows two specific qualities that very seldom go together: he is an extremely clear writer and also an excellent performer of sleight-of-hand. You will no doubt find that Ascanio is very good at writing about what he knows, and knows very well what he is writing about. 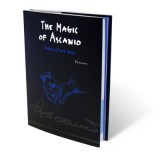 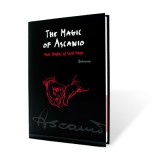 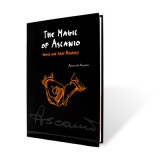 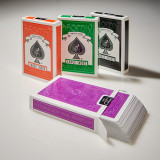