Not since Uri Geller has Israel produced such a dynamic performer! Guy Bavli is Israel's hottest magician, specializing in Mentalism and Metal Bending. Guy is a full- time professional, constantly performing on television both in the United States and abroad. Guy is also a three-time winner of the Israeli Gold Cup Award for "Best Magician."

On this three DVD volume set, Guy reveals for the first time effects that have made him the most sought-after performer in his country!

Volume 2
Incredibly clean - An mental masterpiece with cards!
Question Mark mystery - A matching pair of cards is located by a spectator using only the power of the mind!
Fan Vision - A spectator thinks of a playing card - then the performer names it!
The perfect prediction - The ultimate book test conducted under near-impossible conditions!
Impromptu card stab - A card is selected and lost; the cards are tossed into the air and the spectator´s selection is impaled with a knife!
The lottery prediction - Six spectator´s correctly pick the winning lottery numbers! 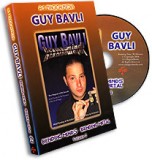