Bob Sheets has been a top professional magician for decades. He's refined and simplified his working repertoire over the years to the point where each routine has been honed to perfection.

Bob Does Hospitality is a series of three DVD's that covers Bob's current close-up repertoire of nine routines. These routines are the ones Bob does EVERY DAY. These are the one's that get THE MONEY.

Each DVD contains one "ACT". Each ACT is built on three dynamite routines that will play well in any close-up situation from strolling during cocktails to table-hopping to formal close-up.

With all three ACTS in his pockets, Bob can go from group to group without repeating a routine until he gets to the fourth group yet each group gets to see a complete show.

This strategy is without a doubt the smartest way to work many events. You have enough material to do a really great job but your pockets aren't filled to the brim and you don't have to carry a case to the show. Each routine is independent so you can mix and match the routines to the audience in front of you on the fly. You can do one, two or three routines as you see fit.

Bob shows you how to easily build all of the card gaffs in just minutes. Three routines use props you probably already own...The Bunnies, Triple Transpo (also know as Copper, Silver, Brass) and The Three Ball Trick.

The explanations of the routines are in-depth and cover every aspect of the work. The DVD's were shot and produced in the HD studio at Bob Kohler Magic.

Here's the breakdown of the material on DVD 1:
Bunnies: This is probably the best reaction trick in magic. It's a classic but Bob's non-stop lines have the audience in stitches from start to finish. Bob teaches two handlings that are dead easy. In fact one handling uses no sleight of hand at all! You can do 5000 tricks but all they want to see are THE BUNNIES!

Intuition: This card routine is Sheets at his best. It's starts off zany and crazy but the routine takes a left turn and becomes a real fooler as the members of the audience read each others minds and have no idea how they did it!

Marked: This stunning packet trick Bob's handling of a classic John Cornelius' trick we've included with John's kind permission. It's got it all. It's incredibly visual, angle-proof, packs flat, plays big and resets instantly. The shocking ending guarantees that your audience's eyeballs will pop out. They'll be running out of the casinos after seeing this one!

Here's the breakdown of the material on DVD 2:
Triple Transpo: This routine is the classic Copper, Silver, Brass invented by Pressley Guitar. Most of us own the diabolical gimmick but don't use it because the perfect routine hasn't existed until now. Bob and JC Wagner invented the original routine published by Johnson Products 30 years ago. Bob's new handling has solved the problem of ringing the gaffed set in and out invisibly without going to your pockets. It's a work of art with the best visuals under test conditions.

Gotcha: Bob has fooled everybody including the experts with this diabolical multi-phase version of Triumph. It's Triumph but so much more. It's Triumph on steroids so I guess it should be illegal. Bob originally sold Gotcha as a dealer item for $25.

Red Hot Moma: This routine should really be called Melt Down because that's what happens to the spectator's brains. Bob's taken Whit Haydn's work into the Stratosphere. Bob's developed a series of "Outs" that lets the spectators make all of the decisions, change their minds as much as they like yet he still controls the outcome. This one's great for that one guy who follows you around. He gets NOTHING...

Here's the breakdown of the material on DVD 3:
Three Ball Trick: Plays HUGE, packs small. Just three balls but this one drives them over the edge. Bob's motivation, gags and the sell of the trick make this an incredibly useful trick to have in your pocket. Non-stop visuals and the best work on the methods for the classic three ball plot...EVER!

Flash Deck: Instant mindreading...just add water!Actually, there is no water except on the audience's brain. The deck does 95% of the work for you. You could do the rest while hanging out on your couch at home. Destined to become a classic.

6 Tricks In 2 Minutes: It's more like 60 tricks in 2 minutes. The deck is gaffed and does the work for you. It's action packed inside of a bizarre Sheet presentational wrapping. Really funny, very visual. 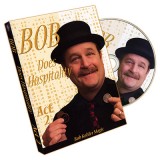 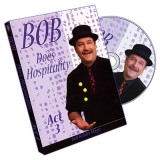